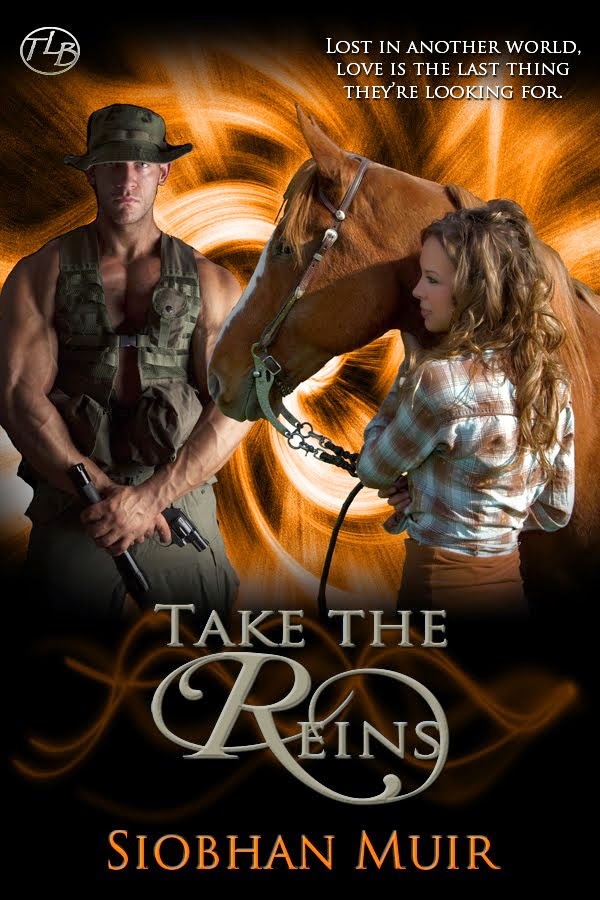 Woohoo! Welcome to the Weird, the Wild, & the Wicked for the release of Take the Reins, a fantasy romance. It's not as hot as my earlier titles, but it's packed full of adventure and action.

Right now, Take the Reins is available on Amazon, Smashwords and All Romance eBooks.
Coming soon to Barnes & Noble, and Kobo Books.


The lilting notes of a flute pulled Bethany’s head up and she scanned the world around her. Something moved from the trees behind her and her jaw dropped as she stared, abashed. A satyr, a real benighted satyr skipped into the clearing before her, playing a reed pipe. Great curling horns of a Dall’s sheep sprouted from his head and a thick pelt of dark hair covered his legs as he danced. The music wove a haunting melody around her and some of her concerns faded into the background.
“Why so sad, dear lady?” He paused before her and offered her a coaxing smile. “Perhaps I can play your sorrows away.”
Bethany wondered if she’d been worrying too much. What were her problems, anyway? She couldn’t quite remember and the music in the satyr’s voice lulled away her stress. A thick, warm balm flooded over her and she sighed with relief. His smile broadened.
“Come with me. I shall grant you all that you desire.”
What did she desire, again? Peace, pleasure, and relaxation. She found herself nodding and leaned toward him, reaching for the hand he offered. The smile darkened with sensual promise.
Before she could touch his fingers, a loud report broke the silence and the satyr jerked his hand back with a snarl. Blood dripped from a ragged wound in his palm and his face warped into a nasty sneer with sharp teeth protruding through his lips. Bethany gasped and scrambled backwards behind the log, panic surging through her. The satyr bolted away into the trees with a bleating complaint.
Dear God, that sounded like a gun shot.
Bethany shook her head, trying to clear the fog drenching her thoughts. She searched the woods around her, her heart thudding in her throat. A voice told her she should run back toward the centaur camp, but given the satyr, running blind anywhere seemed just as stupid as sitting still. At least she’d see what came at her in the clearing.
Bethany waited and listened hard, letting her eyes unfocus to catch any movement from the forest. Nothing came to her senses. The satyr’s passage had faded into the distance and only the wind through the trees broke the tense silence.
Then the shrubs to her left stood up.
Bethany yelped and lurched to her feet, backing away from the odd creature. Bipedal and binocular, it towered over her by a good eight inches and wore all black. She scanned the body cataloging all the items she recognized.
Combat boots laced up to the shins. Black canvas cargo pants with millions of pockets. Batman-like utility belt with odd implements, including a gun holster complete with protruding pistol butt. A black vest resembling Kevlar covered the broad chest and black and brown face paint obscured the skin around piercing blue eyes the color of a Kentucky summer sky.
Those eyes took in her appearance with the same frank appraisal she’d offered then scanned the forest behind her. She swore the creature looked human, male, and from her own world as he stepped closer.
“Bethany Stanton?”
Bethany blinked. That sounds like American English.
“Yes?”
“I’m Major Stephen McMacken, US Army. I’m here to take you home.”
“What?”
The eyes snapped to her face. “Major Stephen McMacken, US Army.”
“Yeah, I got that part. What are you doing here?”
Frustration tightened the lips in the blackened face. “I’m here to rescue you.”
Bethany gaped. “Where did you come from? How did you get here?”
“We came from Kentucky. Your father sent us.”
“Us?”
“Do you think we could leave the twenty questions until after we get out of here?” The eyes flicked toward the trees again as a low rumble hit their ears. No doubt the centaurs had heard the gun shot clearly in the still morning air. While they weren’t close, sound carried easily across the grasslands and they’d soon have centaurian company.
Bethany stared at the tense man and tried to make up her mind. He said he’d come to take her home, but he’d also said her father had sent him. Guess it’s time to make my decision, like it or not. But she hesitated. How the hell had Major McMacken gotten here? Was the doorway between the worlds still open?
“Wait, how did you get here, exactly, Major? Is the rift still open?”
“I came through the archaeological site two nights ago.” He took a step toward her. “As far as I know it’s still open. So let’s get going before it closes, shall we?”
“That’s impossible. I have it on good authority it closed. Three weeks ago.”
“Don’t know what to tell you other than I came through two days ago and it’s time we get back home. So let’s go.”
Bethany sat on the log and crossed her arms over her chest. “I think you should relax a little. You said my father sent you?”
“Let’s go, Ms. Stanton. I’ll explain on the way.” The major reached for her, but she scooted out of reach.
“No.”
“What?” The blue gaze zeroed in on her.
“No, I’m not going back with you. Tell my father you didn’t find me or you found pieces of my body, I don’t really care. But at the moment, I’m not going back to Kentucky. And most likely, neither are you.”
“Dammit, Ms. Stanton, I don’t have time for this.”
Bethany snorted. “Honey, I suspect you have more time than you know. Looks like you’re stuck here like I am.”

Again, Take the Reins is available on, Amazon, Smashwords and All Romance eBooks. Thanks for stopping by and happy reading! :)
Posted by Siobhan Muir at 9:55 AM